This post addresses a common question that is frequently asked on StackOverflow:

What is the best way to retain active objects—such as running Threads, Sockets, and AsyncTasks—across device configuration changes?

To answer this question, we will first discuss some of the common difficulties developers face when using long-running background tasks in conjunction with the Activity lifecycle. Then, we will describe the flaws of two common approaches to solving the problem. Finally, we will conclude with sample code illustrating the recommended solution, which uses retained Fragments to achieve our goal.

One problem with configuration changes and the destroy-and-create cycle that Activitys go through as a result stems from the fact that these events are unpredictable and may occur at any time. Concurrent background tasks only add to this problem. Assume, for example, that an Activity starts an AsyncTask and soon after the user rotates the screen, causing the Activity to be destroyed and recreated. When the AsyncTask eventually finishes its work, it will incorrectly report its results back to the old Activity instance, completely unaware that a new Activity has been created. As if this wasn’t already an issue, the new Activity instance might waste valuable resources by firing up the background work again, unaware that the old AsyncTask is still running. For these reasons, it is vital that we correctly and efficiently retain active objects across Activity instances when configuration changes occur.

Perhaps the hackiest and most widely abused workaround is to disable the default destroy-and-recreate behavior by setting the android:configChanges attribute in your Android manifest. The apparent simplicity of this approach makes it extremely attractive to developers; Google engineers, however, discourage its use. The primary concern is that it requires you to handle device configuration changes manually in code. Handling configuration changes requires you to take many additional steps to ensure that each and every string, layout, drawable, dimension, etc. remains in sync with the device’s current configuration, and if you aren’t careful, your application can easily have a whole series of resource-specific bugs as a result.

Another reason why Google discourages its use is because many developers incorrectly assume that setting android:configChanges="orientation" (for example) will magically protect their application from unpredictable scenarios in which the underlying Activity will be destroyed and recreated. This is not the case. Configuration changes can occur for a number of reasons—not just screen orientation changes. Inserting your device into a display dock, changing the default language, and modifying the device’s default font scaling factor are just three examples of events that can trigger a device configuration change, all of which signal the system to destroy and recreate all currently running Activitys the next time they are resumed. As a result, setting the android:configChanges attribute is generally not good practice.

Recommended: Manage the Object Inside a Retained Fragment

Ever since the introduction of Fragments in Android 3.0, the recommended means of retaining active objects across Activity instances is to wrap and manage them inside of a retained “worker” Fragment. By default, Fragments are destroyed and recreated along with their parent Activitys when a configuration change occurs. Calling Fragment#setRetainInstance(true) allows us to bypass this destroy-and-recreate cycle, signaling the system to retain the current instance of the fragment when the activity is recreated. As we will see, this will prove to be extremely useful with Fragments that hold objects like running Threads, AsyncTasks, Sockets, etc.

The sample code below serves as a basic example of how to retain an AsyncTask across a configuration change using retained Fragments. The code guarantees that progress updates and results are delivered back to the currently displayed Activity instance and ensures that we never accidentally leak an AsyncTask during a configuration change. The design consists of two classes, a MainActivity…

When the MainActivity starts up for the first time, it instantiates and adds the TaskFragment to the Activity’s state. The TaskFragment creates and executes an AsyncTask and proxies progress updates and results back to the MainActivity via the TaskCallbacks interface. When a configuration change occurs, the MainActivity goes through its normal lifecycle events, and once created the new Activity instance is passed to the onAttach(Activity) method, thus ensuring that the TaskFragment will always hold a reference to the currently displayed Activity instance even after the configuration change. The resulting design is both simple and reliable; the application framework will handle re-assigning Activity instances as they are torn down and recreated, and the TaskFragment and its AsyncTask never need to worry about the unpredictable occurrence of a configuration change. Note also that it is impossible for onPostExecute() to be executed in between the calls to onDetach() and onAttach(), as explained in this StackOverflow answer and in my reply to Doug Stevenson in this Google+ post (there is also some discussion about this in the comments below).

Synchronizing background tasks with the Activity lifecycle can be tricky and configuration changes will only add to the confusion. Fortunately, retained Fragments make handling these events very easy by consistently maintaining a reference to its parent Activity, even after being destroyed and recreated.

A sample application illustrating how to correctly use retained Fragments to achieve this effect is available for download on the Play Store. The source code is available on GitHub. Download it, import it into Eclipse, and modify it all you want! 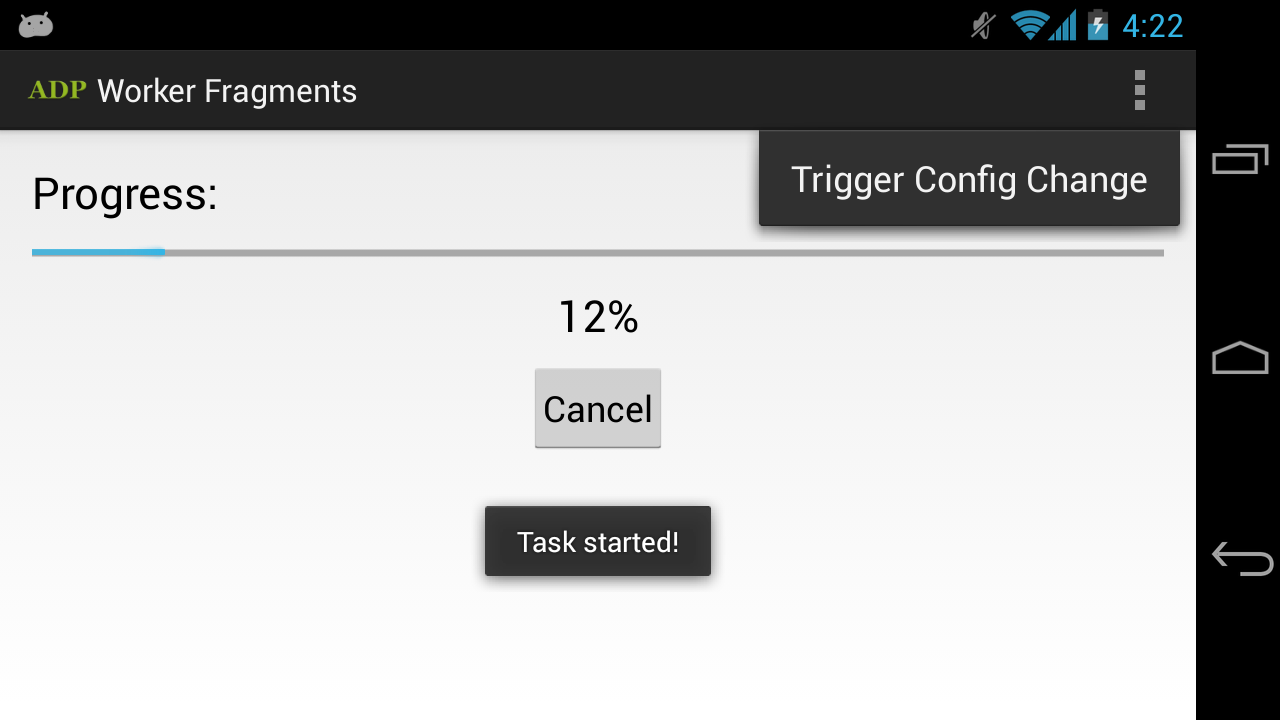 As always, leave a comment if you have any questions and don’t forget to +1 this blog in the top right corner!